Ariane Mather and Her Profound Dream of Africa

Ariane Mather and Her Profound Dream of Africa

Africa has always been a continent of mystique for Ariane Mather. Before she was born, her Dad spent two years in what was then the Congo, now Zaire, doing charity service for his church. He always wanted to go back. 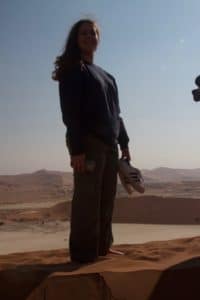 “The continent is very exotic for people in the West,” she says. “The geography is so different. It’s where humans originated and it has so much ancient history.”

When she got an email from Flash saying he and partner Beth Dixon inviting her to join a group travelling with Renedian, she, husband David, and fifteen-year-old daughter Charlotte signed up.

Ariane, a street rider for twenty years, knew she had to acquire off-road riding skills and took a course. She wishes she’d done more. “A few times, like when the gravel got a little loose, I’d start second-guessing myself afraid something would happen. Every part of you gets unsettled, but by the end of the trip, I was doing quite well.” So well, that she came home and bought a BMW F800GS. 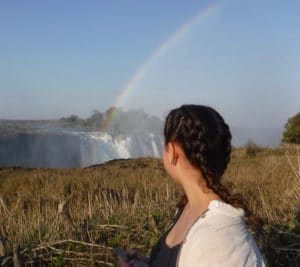 After settling into their accommodations in Victoria Falls, she and Charlotte took the optional excursion to Greenline Africa Trust. “Often you don’t see how the average people of the area live. You’re blowing by on a highway or are the middle of nowhere or in a city. We wanted to visit and see how people manage day to day.

They visited a pre-school, went to a local village, and saw the gardens, blossoming as a result of the drip irrigation project. 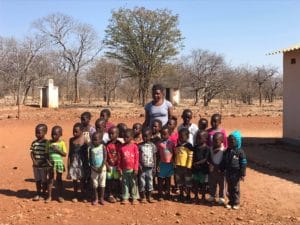 “Children were on a break from school but they came in to sing for us. Like four- and five-year-olds everywhere, some were happy to be there, others, not so much.”

They dropped off supplies with a Gogo (grandmother) — necessities they can’t afford, like peanut butter, cornmeal, and staples — so the family stays fed. The chickens and goats in the yard also needed tending. 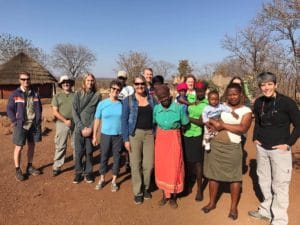 “The amount of work Greenline is doing so people can sustain themselves, like drip irrigation and building an agro-business, is inspirational. It’s humbling to see how they live.

“Homesteads, a group of small, specialized thatched-roof huts, are set into the trees and dry grassy landscape. Each is set up differently, depending on the needs of the family. The one we saw had a kitchen, vented because they cook over an open fire, another for the Gogo’s sleeping area, and one for teenage boys.

“Teenage boys, too, are the same around the world. One had a solar panel on the roof so he could listen to his boom box.

“The strong family bond is impressive. The setting was a lot to deal with and made us very grateful for what we have and where we live. 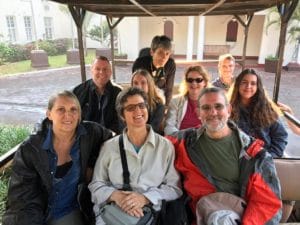 “People were friendly wherever we went. Children would run across the fields to wave at us as we went by on our motorcycles. It gives you a lift. You get to smile and wave back, and you feel good. It’s not something that happens here. 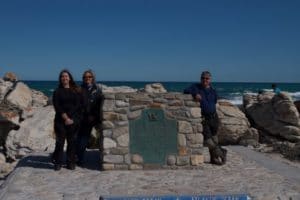 “For the most part, it was wonderful to share a profound trip with my family and a group of friends who don’t get together very often. (There was one other teenager in the group.) 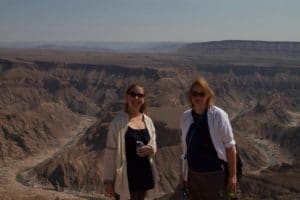 “There’s a lot to take in. You look out and see the vast expanse and it’s almost like a dream. Sometimes you wonder if you’re really there.”