Colleen Norheim was an avid adventurer before she learned to ride. Motorcycle travel opened her world even wider. “I’m not made of money but travel has always been a priority, even if that means working a couple of jobs to pay for it.” 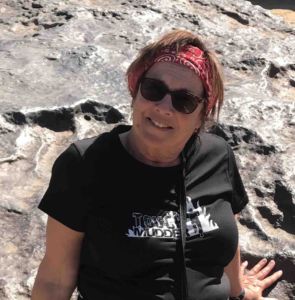 “I love meeting people along the way,” she says. “You realize people all do the same things, they just do them in different ways.”

Still, Africa touched her soul more than anywhere she’s been. 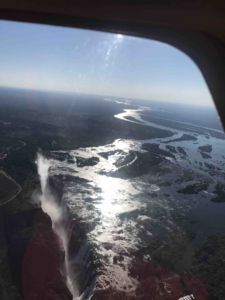 “On the flight over, I chatted with two men who were going back for the same reason I felt after I was there. There’s a spiritual quality about the rhythm, heartbeat, and the feeling of hugeness in Africa. You’re a grain of sand in the grand scheme of things, a tiny part of the diversity that is our earth.

“I couldn’t relate to them because I hadn’t been there yet. Now I have the same feeling they described.“

Colleen’s always marched to the beat of a different drummer. “My childrens’ friends thought I was a little off-the wall,” she relates. “None of the other moms raised horses or lived like I did. When friends of my eighteen-year-old daughter came over to see the horses, one on a Honda Intruder, they challenged me.”

“You’ve taught us to ride horses,” they said. “Why don’t we teach you how to ride a motorcycle?”

Not one to turn down an opportunity, Colleen got her license at age forty-five, purchased a 2006 HD Low Rider and fell in love with the freedom of the road. Short rides for errands or to a restaurant for lunch became longer jaunts. When a new riding friend invited her to join him on a trip to Alaska in 2006, she accepted, with no idea what she’d taken on. 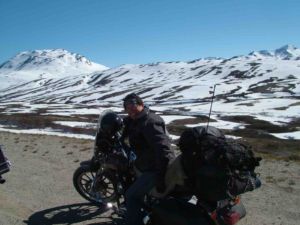 The two travelled 11,000 miles from Philadelphia to Fairbanks and back in thirty-two days. “It was exhilarating,” she recalls. “I accomplished many things I’d deemed crazy. To this day I don’t know how I got through some of them.” 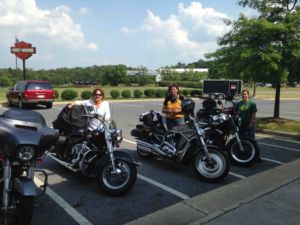 Over the next fifteen years, the two covered every state in the US and up into Canada. When her friend moved away, her quest to find others to ride with led her first to her local Ladies of Harley chapter.

Four years ago, she signed up with Edelweiss to travel through Morocco. Since she’s only five feet tall and they’d be riding BMW’s, she visited her local BMW dealer and ended up buying a used bike for practice. A visit back to the dealer for routine maintenance got her introduced to Rene and his trips.

When friends from the Morocco trip invited her to join them on a private group tour of Japan, she readily accepted. “It was really interesting but they wanted to see how fast they could go on long windy roads all day. It wasn’t relaxing or the kind of travel I enjoy.”

Now sixty-seven, she downsized recently, selling her landscaping business, house, and horses. She traded in her BMW for a new F700GS like the one she’d be riding in Africa. In addition to keeping her hand in real estate, Colleen works sixty hours a week at a winery, running the wine tasting room and teaching cooking classes. 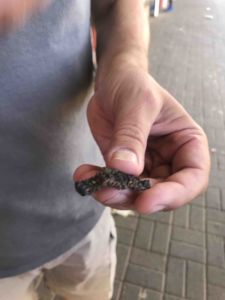 “Local food has fascinated me wherever I’ve traveled,” she says. “I wonder why people eat what they eat, how traditional foods originate, and how they store it.”

After riding in Japan, she was looking for a trip where she could relax and experience the landscape at a nice pace. Waterfalls and Wildlife was that and more. 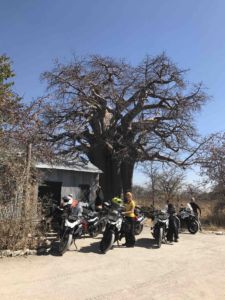 “We went on an excursion into the bush led by San people,” she recounts. “The vegetation looks like nothing special to me, but they pointed out where tea could be made from a particular leaf. I saw how to make a salve for a bug bite, derive medicinal oil from another plant, and make a tea to prevent menstrual cramps.

“What I find most fascinating about every place is how people have learned to use what is naturally there in a way they can survive. The San ate a lot of meat, Norwegians learned to dry things, and Icelanders learned to make a lot of cheese,” 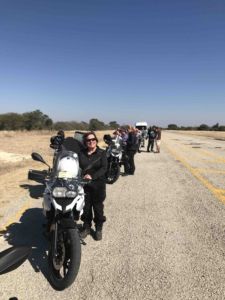 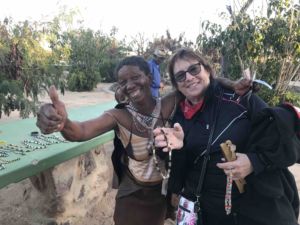 It was the rural people who impressed her most.

“When they don’t have very much, what’s important is camaraderie, sharing what they have rather than isolating themselves. They demonstrated the importance of taking slowing down for meals and savoring family time together.”

Next February Colleen’s headed back to Iceland and Greenland to see the Aurora Borealis. In June she’ll be riding the dune buggy on Renedian’s Mongolian tour.

“Traveling allows you to feel the many facets of the country you’re in and the people you’re with.  Feeling the heartbeat of place.

“It makes me wonder what we’re here for. The older I get, the more I ponder.”