Dan Wing on Being a Witness to Africa

Dan Wing on Being a Witness to Africa

For me there can be no better way to travel and witness Africa’s beauty than by motorcycle. The cool morning air, the bright African sun, the magnificent animals, the coloured earth. Africa has been good for my soul. Through Renedian Motorcycle Adventure and its great team I will always remember Africa’s beauty and its warm embrace. Dan Wing 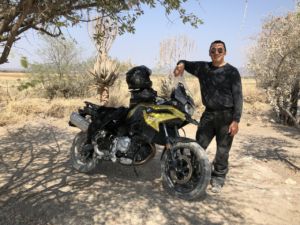 Dan Wing was born and raised in Peace River, in northern Alberta. It’s where he started riding dirt bikes and where later on, he met and married Margaret. He says Peace River will always be home, no matter where he is.

In 1989, Dan and Margaret looked at each other and asked if they wanted to stay where they were the rest of their lives or go  see the world. They could always return. They spent the next thirteen years in Ontario raising a family and building careers. Travel was focused on family, including trips to China and Egypt. Motorcycling got set aside.

Their next move was back to St. Albert, Alberta, northwest of Edmonton. Dan wanted to pick up riding but Margaret had no interest. Not until a chance sighting of two women riders triggered her attention. She wasted no time in getting licensed, both bought bikes, and often, together with long-time friend Fred, began exploring first Canada, then beyond. 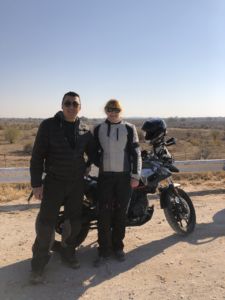 “Born Free is probably the first movie I saw, and it was likely responsible for creating a dream in a young boy’s mind of traveling to Africa,” says Dan. “I never expected it to happen.

“Margaret initiated the trip. She’s articulate and spontaneous. As the instigator, the risk taker, and the one who says, “Life’s there! Let’s live it!” she introduced me to Rene because “we’re going to sign up and go.” It was the first I’d heard we were considering it but we, with Fred, checked out the dates and signed up for the Waterfalls and Wildlife tour. 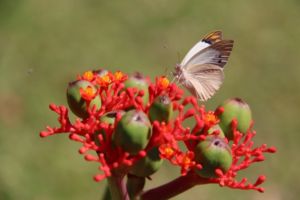 “Realizing my boyhood dream had come true was stupendous. I couldn’t believe I was there, not watching it on TV. I felt like a witness. 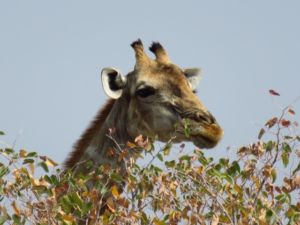 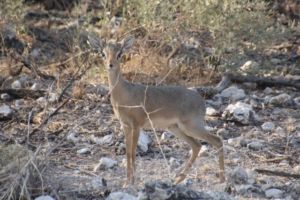 “Wild game looks right through you, as if you’re not there. There’s an unwritten rule that you’re a visitor and must respect the lay of the land. It’s okay to be in awe, but just don’t get out of the truck while on safari!

“Being in Africa was sobering and humbling. It wasn’t what I expected. Absorbing the scenery—mountains, gigantic sand dunes, and the Okavango Delta—almost overwhelmed me. 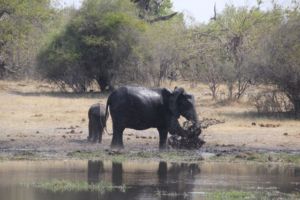 “You’ve got to pay attention. It’s like when I used to go hunting as a young boy, but more amazing in that I could be standing there and a creature can come up and share its home with us. Similarly, you can embrace the land and the people in a way that’s more intimate than being a visitor. As a result, it’s a wholesome feeling and so different than anything I’ve experienced. 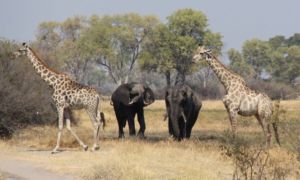 “One day we were in the truck and the driver stopped for approaching elephants. One swayed gently and quietly towards us, totally non-aggressive, stopping about six feet off our front bumper. It looked like he was trying to communicate, asking if we were going to move or would he have to walk around us. Eventually, he sauntered around in his gentle manner and carried on his way. If he could talk, I wonder what he’d be saying.

“The whole trip was like that, whether we were greeting warthogs or the cat at the restaurant. 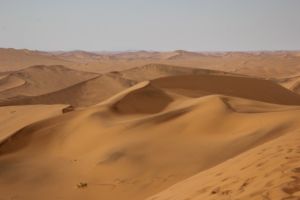 “I need to be on the ground to feel born free—standing on Big Daddy (dune) or in the Delta having our tea. That’s when I really get a feel for the land—grounded, touching the earth, touching Africa. The ground the elephants walked on. This is their home and I’m standing here. 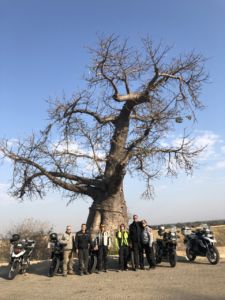 “I feel that freedom and wholesomeness when I ride. You’re switched on but you’re more aware of where you are. It’s the same as being in the bush. If you don’t want to be there, you shouldn’t be. You won’t connect to what’s there. 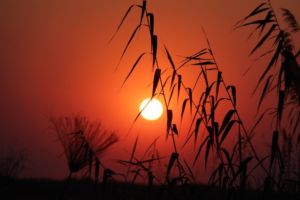 “For me, the blend of riding, seeing the country, and experiencing the animals is perfect. I’ve never felt that way when we traveled to other places. Africa’s incredible vitality creates a real connection to my heart. You see the cycle of life, including the hardships. It’s raw, not coming to you on television all filtered out. This is the way it is!”