When George Revington returned to riding ten years ago, he was looking for something to stretch his comfort zone. Since then he’s motorcycled in Patagonia, Peru, Chili, Switzerland, Germany, the Rocky Mountains, and most of Appalachia. But nothing compared to the exhilaration of riding in Mongolia and the Golden Eagle Festival. 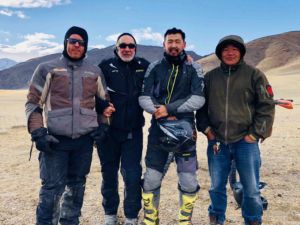 He knew Mongolia would challenge his riding skills, but he couldn’t resist an opportunity to visit the land of Genghis Khan, a historical figure who captivated him.

“Genghis Khan’s influence on the modern world is so underreported and so profound. The way he thought and the way he created new structures in such a short period of time is fascinating.

“His family was abandoned by their tribe in the Onon River and left to die. He was a slave for unknown years, yet organized the world, leaving a constructive, positive era. He went from being the lowest of the low to someone who almost ruled the world.” 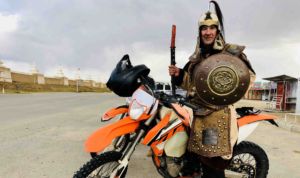 The terrain and riding was like nothing he’d experienced. “I never imagined anything so remote, vast, and beautiful existed. There were no signs, fences, people, traffic, or multiple roads. Riding across the land freely for days was a stunning experience. Some of the lands we traversed crossed the Silk Road.

“The landscape is mostly steppes—grassland—with a few cottonwood trees in the low areas. We were also in mountains, with larch trees at higher elevations, where you could see forever. A little white dot in the middle of nowhere would be a ger, someone’s home.

George stayed in Karakorum, once the capital of the Mongul Empire, now a grassland. “The whole world was governed from that spot and there’s virtually nothing there now except a Buddhist Monastery. Mongols were nomadic and when they moved, they packed up their gers and took everything with them, leaving no traces of being there, not even monuments. 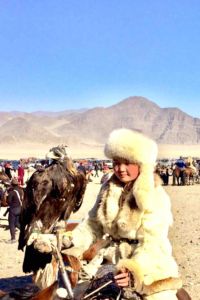 The only way to get to the rough frontier town in Western Mongolia where the Golden Eagle Festival is held is by plane or motorcycle. It happens late in the season when most of the Ger camps are closed so Renedian’s support vehicle carries all the things necessary to survive for sixteen days, including tents, food, and stoves—and a cook. 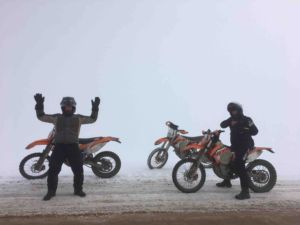 Temperatures dropped to well below freezing as they proceeded north, but it usually warmed up during the day. “We had good equipment, wore layers, and were never really uncomfortable. There were some beautiful days in the 50s and 60s and when the sun was out.” 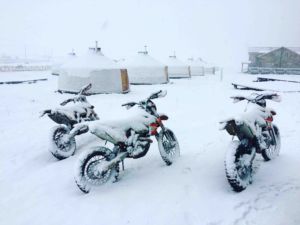 Like anything else, timing is everything. Six inches of snow fell once, but the good thing was they were at a fabulous hot springs, drinking bear and vodka. The next day they rode out in the snow. 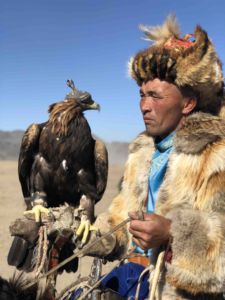 “The festival was chaotic, crazy, and fun,” says George. “Five hundred Kazakhs, 500 tourists from all over the world, and 125 eagle hunters from western Mongolia converged on a big open field marked with rocks. Ger camps were set up just for the event.

“Their authenticity was striking—from people’s faces and their costumes, to the horses. It felt primordial. These are hard tough, smart, and determined people who have lived deep lives. 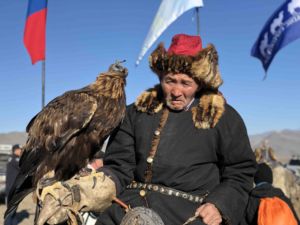 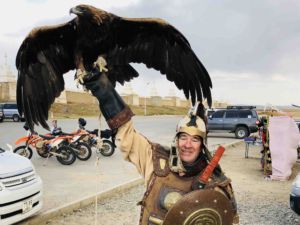 “The tradition of using golden eagles to hunt goes back thousands of years. At the festival, they’d launch eagles off the mountain behind the field and try to get them to land on their arm or simulated prey animal. 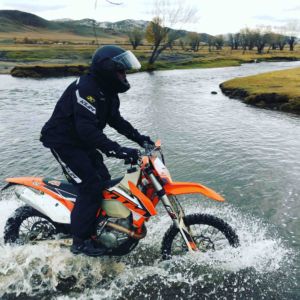 “You don’t know what you’re capable of doing until you test yourself. If you go for it, you can do it. You can do the cold, the bikes, and go places you didn’t think you could go. Other people do it and if you just trust them, they’ll get you through a lot of stuff. Trust the bikes. They can get you through sand, snow, and water. Trust the throttle and keep your eyes up. It’s a great adventure and it makes you want to do more. 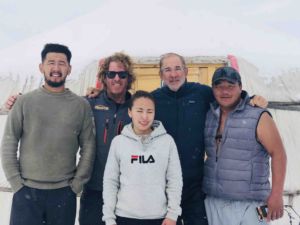 “I almost didn’t want to come home. Something cool happened every day and I kind of miss it.”

George will get a chance to revisit that excitement when he takes a four-month excursion next year, departing from Wales and arriving in Bejing via the Silk Road.