Price Per Person
from USD$ 6,795
Below is what is included

We will leave Ulaanbaatar in time for the Golden Eagle Hunting Festival in Olgii. Daytime temperatures will be from -1 C to 10 C so cold weather riders – this is for you! This one-way route flows with the hilly and mountainous side of Mongolia with a rest day at the relaxing Tsenger Hot Springs. We leave the bikes in Olgii and fly back to UB at the end of our tour (included). This ride is guided and fully supported. Available bikes are enduro style 250cc – 650cc and we have models from Husqvarna, KTM, Honda, and Suzuki. Newer 800cc UTV’s (side by side) are also available. (1,770 kms plus optional 240 kms around Olgii). 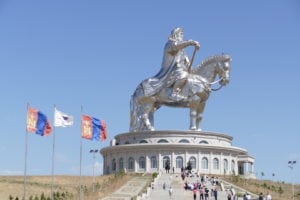 DAY 1
Arrival
No riding. After a local Buddhist monastery visit we head out to the Genghis Khan Statue Complex. In 2008, a gigantic statue of Genghis Khan riding on horseback was erected on the bank of the Tuul River at Tsonjin Boldog, 54 kms east of the Mongolian capital Ulaanbaatar, where according to legend, he found a golden whip. The statue is 40 meters tall and wrapped in 250 tons of gleaming stainless steel. The statue is symbolically pointed east towards his birthplace. Back in the city we will attend a cultural show in the early evening and quick meal at a local restaurant will finish off this day. Overnight in very nice hotel downtown. 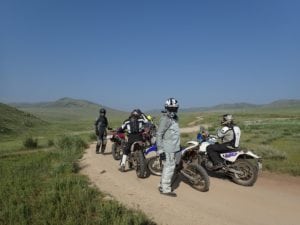 DAY 2
300km
We have a full day ride from Ulaanbaatar, getting off the road quickly outside the city of UB and following a wide, rolling wide river valley, stopping at Hustai National Park for lunch, hoping to catch a glimpse of the Przewalski\’s horse, the worlds only true wild horse that were re-introduced in the park after near extinction in late 1950’s. A combination of paved and dirt roads will bring us to Kharkhorin, an ancient capital city of Khubilai Khan, a grandson of Genghis Khan. Overnight in ger camp.

DAY 3
200km
Morning visit to the Erdene Zuu monastery which was one of the largest monasteries in Mongolia before it was been destroyed by the Communist regime to repress religion. Today the monastery is active and holds around 100 monks. A bit of paved roads and we get back onto track, hopping from hill top to hill top until we reach Tsenkher hot springs. We should expect some shallow river crossings today. Overnight in gers beside the hot springs. 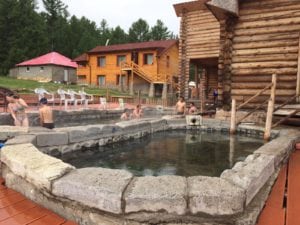 DAY 4
Off Day
Rest day to rest, fix bikes, laundry, and explore the area on local horses if you wish. Overnight in gers beside the hot springs. 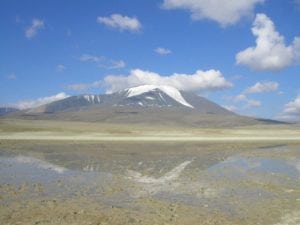 DAY 5
290km
We will use a combination of paved roads and track to get us to the high (2060m) Terkhiin Tsagaan Lake (Great White Lake) for our evening stop. If we arrive early enough, we could get hiking up to the Khorgo volcano crater, or rent horses for an easier time. Overnight in ger camp. 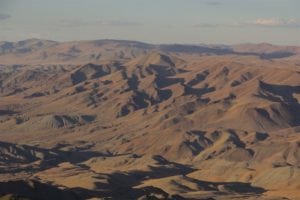 DAY 6
260km
We cross the Khangai mountain range today, peaking at 2600m and the Solongot pass, one of Mongolia’s greatest passes. We will crest it on the way to the lumber and berry village of Tosontsengel, Mongolias coldest spot where it normally dips below -45C in winter. The valleys arround it are magnificent – tranquil and serene. Overnight in a simple, local hotel. 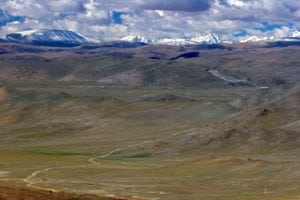 DAY 7
250km
From Tosontsengel and the Ider river valley the track will continue with dirt roads through the plains of Zavkhan province into vast grass lands. We will stop at Telmen, an alpine lake, and arrive into the Songino village in the afternoon. Overnight in a simple, local hotel. 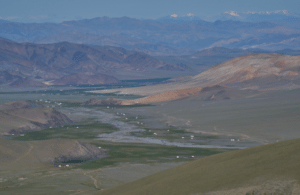 DAY 8
230km
Today we take another riding day towards west to Altai Mountains, our dirt ride trek goes into valley of the great lakes, arriving Uvs Lake’s southern shore. Our ger camp will be beside the lake, and our cool time of year for this visit should keep the bugs at bay. Overnight in ger camp. 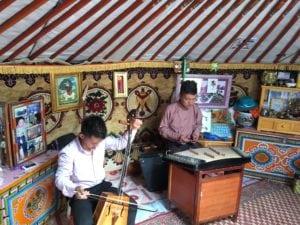 DAY 9
190km
Khyargas Lake is a salt lake, and at over 2300 km2, the second largest lake in western Mongolia. In the morning we can explore the lake then return to ger camp for lunch. This afternoons track goes into trans-Altai semi-desert plains, and passes ancient stone tombs and stone monuments that dates back to 6-8 Century A.D. We arrive at Shaazgai Lake where we overnight in gers of local families. In the evening we relax and enjoy a folk performance of the local people. 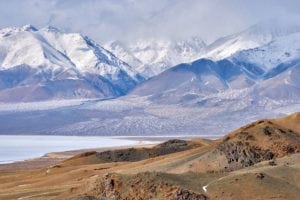 DAY 10
200km
Today we ride to Bayan-Ulgii province along the Hovd river and via Achit Lake, arriving in Olgii, and transferring to a private ger camp in Khatuu river valley. Overnight in ger camp. 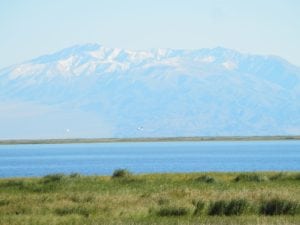 DAY 11
50km
We take a day trip to Tsambagarav Mountain Eagle Hunters and spend time in the homes of the eagle hunters to witness their preparation for Eagle Hunters Festival. We return in the afternoon. Overnight in ger camp. 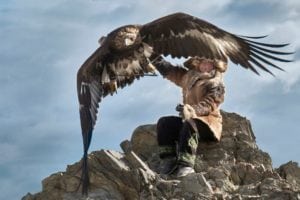 DAY 12
(optional 150km)
Day 1 of the Golden Eagle Festival. Another optional ride if you want to miss a bit of the festival is to go up to the Russian border. Overnight in ger camp. 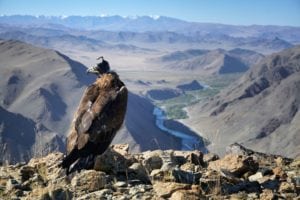 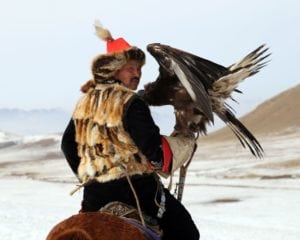 DAY 14
Fly to Ulaanbaatar
Our flight back to Ulaanbaatar will likely get us back to the capitol city in the early afternoon, so we can spend a few hours doing our last minute shopping before our last group dinner. Overnight in very nice hotel downtown. 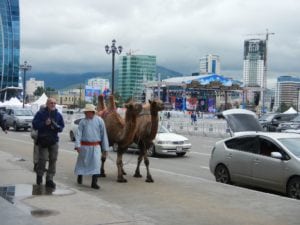 DAY 15
Fly out
Fly out. After breakfast your driver will take you to the airport, bringing your Mongolia experience to a close

Read a story from this tour: