A motorcycle honeymoon in Mongolia may not top a wedding planner’s list, but the Gobi Discovery trip was a perfect way for Dave Belton and Marina Douglas to celebrate their marriage. 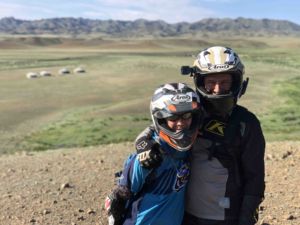 Marina had always wanted to travel there. “It’s such a cool country with so much nature and fascinating history. Even before we rode motorcycles, I imagined we’d ride there in a jeep or on horses. After learning to ride, I wanted to ride in Mongolia, especially the Gobi Desert.”

Dave admits he went along with the plan, including the group tour. 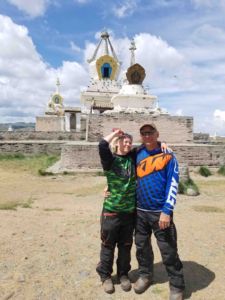 “We’d chosen a guided tour in South America but were the only ones on it so it ended up being a self-guided trip with arduous riding. It was straightforward to get around even though we didn’t speak Spanish, but we were less confident we could navigate as easily in Mongolia. It was very helpful to be supported with bikes, fuel, and the typical repairs and suspension challenges. We also didn’t have to carry all our stuff on a dirt bike.” 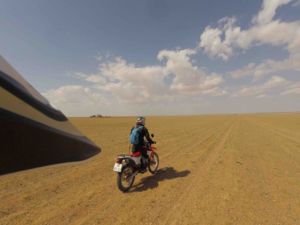 Both are avid riders, proficient in both off-road and road travels. “Mongolia was pleasantly not challenging,” says Marina, “except for some water crossings. At 5’3” I can’t touch the ground on a full-sized bike. My height also makes stopping and turning around hard but you’ve got 500 miles to do it.” 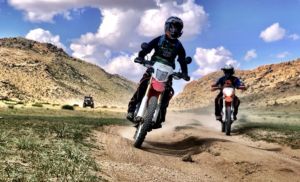 Dave enjoyed the transition from alpine to desert riding. “I really liked the low amount of pavement and that I could go anywhere on my 450KTM. If I wanted to explore up a hill, I didn’t have to worry about staying on the tracks we happened to be on. Most of the time we didn’t encounter any other vehicles, just the others in our group.

”Another time we rode down a river bed through a canyon. You don’t do that in the U.S. or Canada!”

“I, too, was surprised by how much freedom there is,” says Marina. “It’s the definition of ultimate openness. You can literally go anywhere you want. If you see a mountain in the distance, just go up the mountain. I don’t know anywhere else you can do that.

“It was fun herding animals on motorcycles. In other countries they’d be fenced off but in Mongolia, we’d go through herds of sheep, goats, camels. You can actually ride around and get them to go somewhere.”

Aside from the riding, Marina and Dave were astounded by the people. 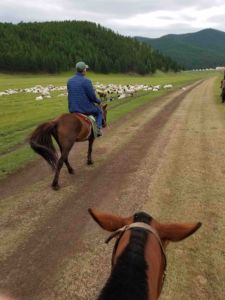 “I’d come up to people on a horseback,” says Marina. “We didn’t speak a common language but I got them to let me ride their horse.”

Dave was fascinated at the accessibility to senior officials. “First was at Naadam festival where a guy standing around talking with people, and no security guards or weapons checks, was a former Prime Minister. It would be like George Bush standing there!

“Later a massive convoy of vehicles pulled up when we were at the ger camp hot springs. Another former Prime Minister emerged and sat in the hot tub with members of our tour group. 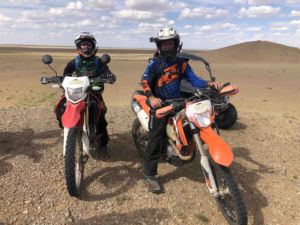 “The non-violence of that society is captured in those interactions. It doesn’t occur to the PM that some weirdo wants to kill him. That was refreshing; for Americans, almost quaint.”

“People were interested in us, too. There was none of the animosity towards foreigners you see in other places. They wanted to put their kids on our motorcycles and take pictures. They were generous and a lot of fun.” 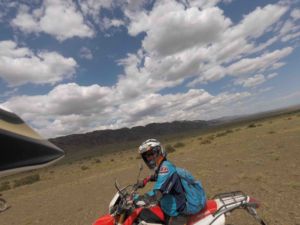 Mongolia held another personal connection for Marina, who was born in Russia and spent her first twelve years there. “The Russian connection was cool for me. Although Mongolians speak a different language, they use the same Cyrillic alphabet and I could read signs and words.

“Some Mongolian pre-packaged and canned food comes from Russia, so I got to eat Russian ice cream and other foods I remember from of my childhood. We also drank Mongolian vodka in the traditional Russian way—with Russian pickles.” 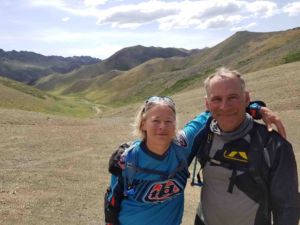 Dave and Marina have a list of places to explore, beginning with Thailand in March. But they’re not done with Mongolia. They plan to return in the next five years to explore those vast landscapes more.