John Eckert Rides the Beginning of a Dream

John Eckert Rides the Beginning of a Dream

John Eckert had always wanted to circumnavigate South America but never had anyone to go with. He also hadn’t figured out a feasible way to get himself or a bike there. When he heard about the Journey to Ushuaia trip he decided to go, but not without huge reservations. 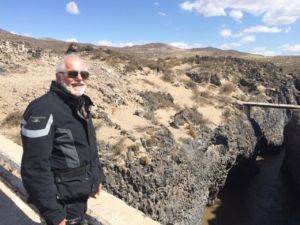 “All my riding has been with my wife Karen or occasionally solo; never with a bunch of strangers I have no knowledge of, let alone any familiarity with their level of experience. The only time I was part of a group was at the Alps Riding Academy, an Edelweiss training program designed to prepare guests for their tours.

Like many of his riding peers, John began riding in his early twenties and ended up selling his dream bike, a 1978 Ducati 900SS when marriage and family assumed priority. In 2000 he returned to two wheels on a Ducati 900 Monster, replaced in 2010 by a Multi Strata.

A yen for moto-travel took hold in 2014. The stars weren’t aligning to realize his dream of circumnavigating South America so he set his sights on Europe. Air Canada’s Fly Your Bike program wasn’t in place yet so he bought a BMW 1200RT in England. There he could store it and use North Hampton as a home base from which he and Karen could explore Europe. They’ve been back every year since for two-month stints, enjoying in-depth travel throughout the continent. Plans for Morocco fell through in 2019. While still in Wales, Karen got off the bike to close a cattle gate, slipped through the cattle grate and broke her leg. 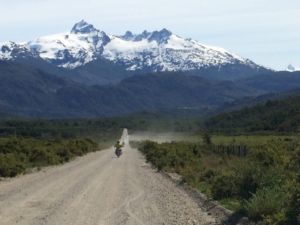 That opened the way for John to join Renedian’s Journey to Ushuaia, but not without misgivings.

“You’re committed to three weeks and don’t know if everyone will click, how they’ll ride, or if they’ll be hotshots like I’d seen in the Alps. How much would I remember about riding on gravel from the courses I took with SMART Adventures? I’d gotten into particularly bad gravel in Romania and managed. This time, however, I’d be riding alone which would lighten the load, and I didn’t have to carry luggage.

John talked his concerns over with Rene and decided to go. As with most groups, some of the people were harder to get to know but by the end of the first week, they were old friends. 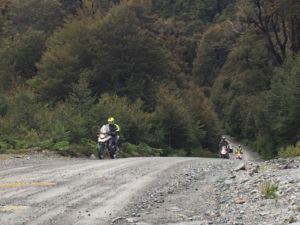 “The roads were far, far worse than I expected. It was like riding on marbles. What fresh hell is this, I wondered? I enjoyed it most when I couldn’t see the rider in front of or behind me. I could ride at my own pace without having to adjust for other riders.” 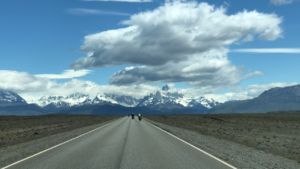 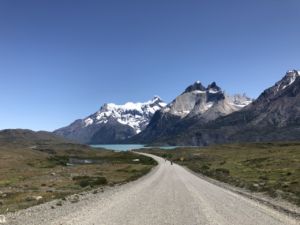 “All in all, the riding was great. The scenery—waterfalls, mountains—was awesome. Seeing herds of guanaco was incredible. I’d wanted to see condors and we saw two or three. We watched pieces of the Perito Moreno glacier calve off. 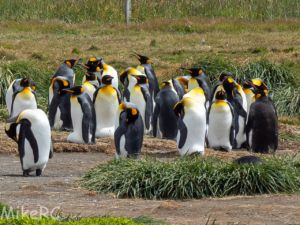 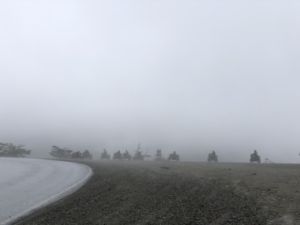 “We were warned about the winds but no warnings can prepare you for the horrendous gales. I’ve been in high winds in Norway but none that are sustained for two to four hours a day. You’d watch the rider in front going down the road at a forty-five-degree angle and realize we were all doing it. Mountain passes which transition desert to lush vegetation also made for wild swings in temperature and precipitation, but through it all, the views were unbeatable. 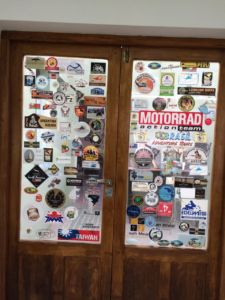 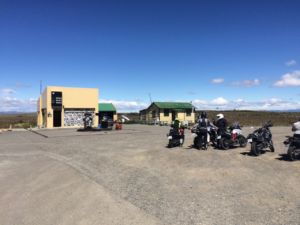 Station windows and pumps covered in stickers from motorcycle overlanders.

“At one point, we stopped for another rider stopped at the edge of the road, headed in the opposite direction. It turned out to be Itchy Boots, a Dutch solo rider circumnavigating the world on her Himalaya. After making sure she was okay and leaving her some food, the neighbourly thing to do, we all continued on our way.

“Compared to riding in Europe, the gravel and wind elements were a lot more challenging although the South American hairpins weren’t as tight, especially as those in the Alps or Romania. 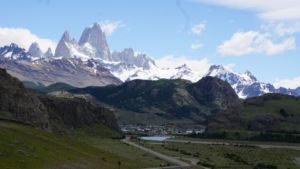 “It’s a great rider’s trip. I’d like to go back to spend more time in smaller centres and interact with the people. It’s hard to do that when you’re in a group and moving every day.”

First up, John and Karen are heading to Morocco in April, 2020.