Most people cite seeing exotic animals in the wild and meeting people from different cultures and worldviews on their home turf as reasons for traveling to Africa. Riders also recall those experiences as their most vivid memories of the trip. Kyle Armstrong, whose non-motorcycle interests tend toward the introspective, like traveling, fly fishing, yoga, and guitar playing, remembered it differently. 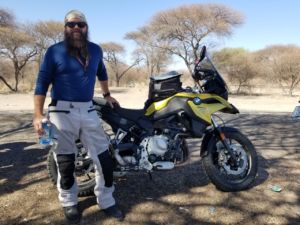 As a regular at the Calgary Motorcycle Show, he’d been intrigued by Renedian’s offerings for years. When it came time to travel, all Kyle had to do was decide which trip to book. An African destination won out because other than Antarctica, it was the only continent he hadn’t visited.

Kyle grew up around motorcycles. “I never had a chance,” he says. “Both grandfathers and my father rode British motorcycles. When I got a full-time job at age twenty, the first thing I bought was a small Honda. A year later, I got my first Harley-Davidson.” 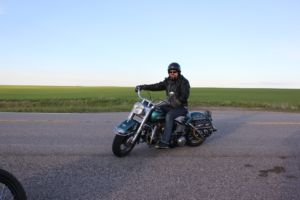 Since then, he’s enjoyed touring Western Canada’s backroads on various Harleys, Nortons, and Triumphs. He and his wife Eddi who often rides with him, have “about eleven bikes” in various states of build, including a Ural with a sidecar for dog Buster, soon to be joined by puppy Dook. In fact, the 1974 Norton Commando he restored and sold, helped finance his trip to Africa. Prior to Africa, he’d never done any off-roading, other than a few gravel roads to get to his favorite fishing and camping spots. A 1955 Panhead he’s restored is his pride and joy, and main ride. 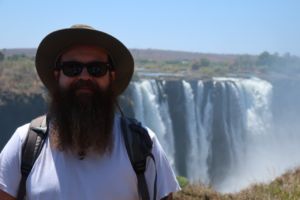 Kyle knew the riding on the Victoria Falls to Cape Town tour would be interesting and challenging. “I didn’t do great and there were a ton of whoops and two falls, fortunately merely blips in the day. I took the time to learn, think, and enjoy every minute. I looked around at landscapes I’d never experienced instead of focusing on the gravel and letting it distract my enjoyment.

“The diversity between each country, each with distinctive highlights, made it seem like three separate trips,” he says.

“In Botswana, it was the wildlife. The most amazing safaris you can imagine in the Okavango Delta and the Chobe River cruise showed us raw nature at her finest. 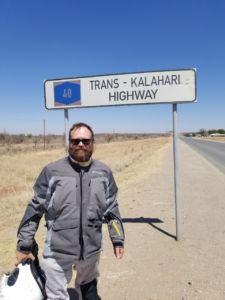 “Namibia’s solitude is unmatched. The desert is jam-packed with wide-open spaces, desolate beauty, and untouched landscapes. There’s no real human presence, no contrails, and no telephone poles—things that are always around us and we don’t notice until they’re not. 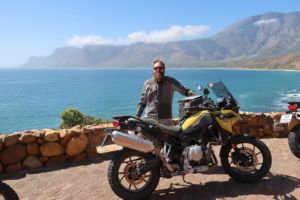 Kyle, who’s retired, extended the beginning and end of his trip for a thirty-five-day visit. “The trip piqued my interest in African history and I began reading about it on the way to the airport. Going in, I didn’t know what to expect of these complex lands, and still don’t.” 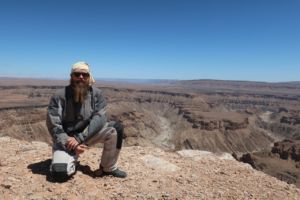 His most vivid memory is the night at a Namibian desert inn. “The evening started with a superb outdoor barbecue, prepared by Renedian staff. After that we sat around the fire in the desert night, just like the ancients. That’s when I felt the unmistakable camaraderie of our group, sharing stories, and enjoying each other’s company.

“Africa makes you realize the most pleasing things in life are simple, down to earth, and very good.”