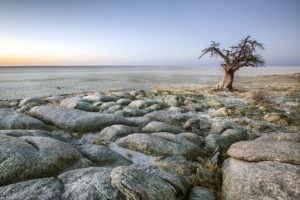 They’re vast, desolate, inhospitable, and sometimes mysterious. Most of the time they appear as glaring, white, endless plains. During the rainy season they are one of the most important wetland areas in Botswana. You can see them on the Waterfalls and Wildlife and Victoria Falls to Cape Town (gravel) trips. It’s also where TOP GEAR show did their Botswana episode.

Northeast of Africa’s Kalahari Desert and southeast of the Okavango Delta in northern Botswana, lie the Makgadikgadi Pans. Reputedly the world’s largest salt pan landscape (roughy the size of Belgium), it’s made up of many pans, the largest being Sua, Nwetwe, and Nxai. The huge salt-encrusted pans are all that remain of Lake Makgadikgadi, an ancient lake once covering as much as 80,000 km2. The Okavango, Zambezi, and Chobe rivers likely emptied into this lake until tectonic shifts changed the elevation of the landscape and a changing climate dried up the rains more than 10,000 years ago.