Nature programs have always captivated Mike Normandeau. While the exotic wildlife fascinated him, he was even more intrigued to see how other cultures lived.

Ever since Kim Normandeau’s Grade Three teacher showed the class slides of a safari she’d been on, Kim’s dreamt of going to Africa. 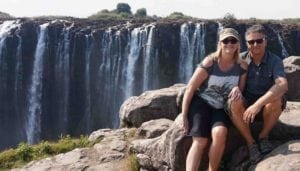 The Edmonton couple wanted to travel to Africa with Renedian Adventures, but neither of them rode a motorcycle.

“We’ve been RVers all our life,” says Mike. “We’ve travelled to the four corners of North America and were ready for a new adventure. 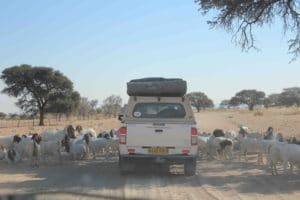 The solution? A Renedian-organized Private 4X4 Tour, generally following the Waterfalls and Wildlife motorcycle safari, but with four 4X4 trucks and rooftop tents.

“Our thirty-four foot fifth-wheel would have been a luxury craft on this trip, but not having that was part of the attraction,” said Mike. “We wanted to experience the rawness of the places we were travelling through.”

The group stayed in lodges half the time and (rooftop) tented the rest, often in campgrounds adjacent to a lodge. That gave them an opportunity to shower and do laundry.

“When you first hear you’re going to be camping in Africa, you don’t know what it’s going to be like,” says Kim. “I didn’t feel like we were roughing it at all.” 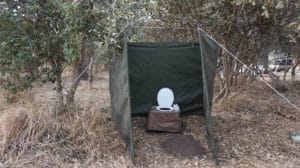 The small Toyota 4X4 pickups had small twelve-volt refrigerators, handy for the fresh groceries they’d pick up along the way. Cooking utensils, lawn chairs, and sleeping bags were all standard fare. The canopy on the back took “two minutes” to transform into a tent and was ready for sleeping in no time.

Mike joked about getting used to the left-hand drive. “Traffic circles were a challenge at first, and I spent most of our twenty-one day trip engaging the windshield wipers instead of the turn signal.” 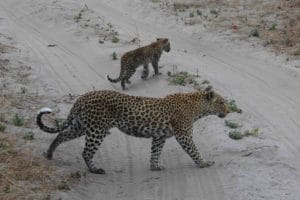 Animals roam free and wild, a fact of life you need to adjust to when driving Namibia and Botswana’s rural roads. Elephants, baboons, sheep, goats, pigs, warthogs, and occasionally a whole herd all crossed their paths. 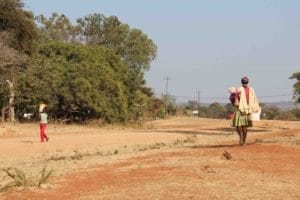 Given his interest in culture, the villages caught Mike’s interest. “The structures changed as we moved through geographical areas, but everywhere we went, family and extended family lived together. Sometimes there’d be twenty or thirty huts together; other times, a marker, like an old tire hanging from a tree, indicated the location of someone’s homestead, out of sight from the road. Fences varied in height and structure, depending on the local wildlife.

“People worked hard and everyone seemed very happy. Women and children would walk miles to get water, and everyone would have something to carry. One five-year-old was carrying a baby on his head; children look after children.” 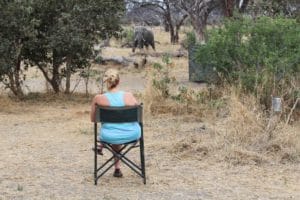 Sleeping in the truck tents, there are no lights anywhere except for the stars. “You could hear the lions and hyenas and it was a little eerie,” says Mike. “During the day we were sitting and talking as an elephant walked right through the middle of our camp and we didn’t hear it. We only looked up because we heard branches breaking. 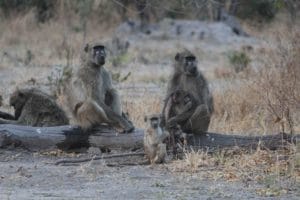 “There were so many times that I stopped and said this can’t be real. Our first day in the Okavango Delta we sat by a pond, watching a croc floating in the water. It looked more like a painting than reality.

“Stopping to watch zebras while having tea prepared by the safari guide made me feel like we were in a Disney movie.” 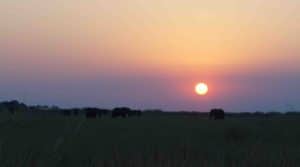 Kim regarded the day they went on the Chobe River cruise as perfect. “It was breathtaking to watch hundreds of elephants, giraffes, and hippos against the setting sun.

“Another nice thing was that we didn’t have to Google where we were going or do any of the planning. It was refreshing to unplug and enjoy the surroundings.” 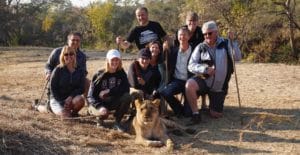 “Sitting around the fire at night was extraordinary and powerful,” says Kim. “All of us had heavy-impact moments. Sometimes the people inspired it, other times the animals or night sky evoked them. Africa will stay in our hearts forever.”