Renée Robertie And A Trip of Many Firsts

Renée Robertie And A Trip of Many Firsts

For several years, sixty-one-year-old Renée Robertie has been thinking about how she wants the rest of her life to roll out. “People ask what you do for a living. We respond with our job title but that’s not really what we do for living. Living is doing things that make us feel excited about life. Motorcycling is one of those things.” 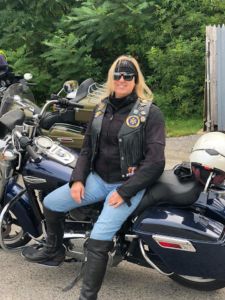 Renée’s motorcycling began in the fall of 2011 when Jack, her sweetheart, came home with a motorcycle for him and a leather jacket for her. Sitting on the back didn’t sit well with her and the following spring she came home waving her endorsement. A couple of days later she had a 900cc Kawasaki Vulcan and she and Jack have been riding together ever since. She’s now on a HD Switchback.

The duo loves moto-camping and have ridden across the U.S. to destinations including Grand Canyon, Zion, and the Northeast.

Looking for a vacation of her own while Jack bicycled across the country in 2017, she stumbled across a women’s trip to Cuba with Women’s Motorcycle Tours. She decided to sign up.

“I’d  never done a motorcycle trip without Jack and had broken several ribs in a motorcycle crash about six months earlier. Intrigued by an all-women’s tour, I signed up in spite of my reservations. 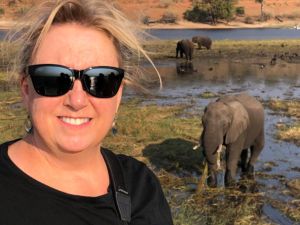 “I struggled at first. It was the first time I’d been on a bike since my crash, never on a dual-sport, and I was experiencing severe anxiety just getting fitted. I got myself under control, got out on the road and was fine within ten minutes.

When she learned Women’s Motorcycle Tours had teamed up with Renedian for the Waterfalls and Wildlife trip in Africa in 2018, she was interested.

“When you do something you don’t think you can do, it gives you confidence to do more things. Cuba was the beginning.

“It’s important for all women to feel like you can accomplish something even though you’re afraid, trying to pretend you’re not falling apart inside. You can take a deep breath, deal with it and know everything’s going to be okay.

“Rene prepared us for the trip really well by telling us what to pack and what to expect. From the tone of Danise’s welcome email, I felt she was going to be a real sister on the trip – in the chase vehicle. Rob was the first person I met at the starting point in Africa and he immediately put me at ease. 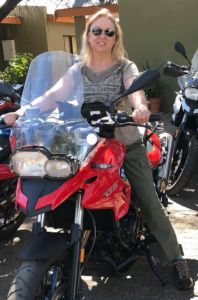 “I had never ridden on sand and dumped the bike on a pathway. I was horrified, but several of the women encouraged me to own it. Be proud of what I did. They turned around what was an embarrassing situation. Throughout the trip the women were always there for each other, making sure everyone was having a good time. Being sisters.

Africa was a trip of many firsts for Renée. “There was something new and unusual everywhere you looked—elephants crossing, an ostrich running with you, or passing a lion. I’d never seen so many animals in their natural habitat up so close.” 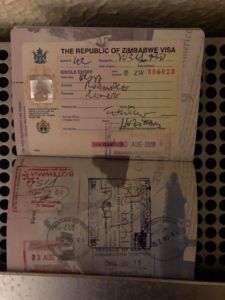 Pescatarian (vegetarian but eats fish) since age seventeen, she decided it was important to taste game as part of her experience.

It was the first time she ate curry, drank gin, and flew in a helicopter, not at the same time. 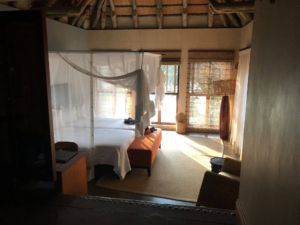 “When I went to Africa, I was approaching the time when I’d make a decision about how things would look in the coming year. Several women, great role models, had retired early and done interesting and exciting things. I knew I wanted to figure out how I could retire early. I figured it out and just retired on March 1st.

“Jack knows how excited I am about all this. He wonders if he’s going to come home one day and there’ll be a BMW in the driveway.” 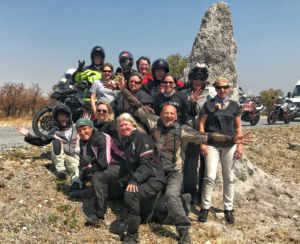 Renée’s making plans with two of the women from her group for summer rides. In 2020, several of them will head to the west coast to take part in Women Motorcycle Tours’ Suffragist Centennial Ride.

“The friendship and sisterhood created in Africa extends well beyond that trip.”