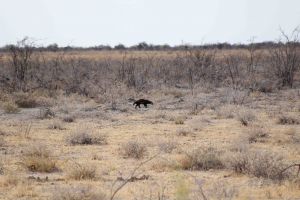 Honey badgers are members of the weasel family, known for raiding beehives and staying out of sight. They’re also fearless, determined to succeed, not afraid of larger than life challenges, and have a reputation for high performance. That pretty much sums up her African experience.

Kelly and Rene have been friends since before Rene left for his RTW trip. When he came back, they reconnected. She and her friend Steve heard his stories and saw his pictures, and decided to go on a Renedian trip. In 2009, both of them learned to ride a motorcycle specifically to eventually ride this trip.

They both bought BMW 650GS’s like the one’s they’d be riding and at Rene’s recommendation, rode to Alaska in 2014 to see how they’d adjust to the daily miles, being away on motorcycles, sitting on the bikes for so long.

In the mean time, she met Cris Simpson and three of them planned to go. Cris came to it late in the game and wasn’t prepared, so they postponed it a few years so he could save up the funds to go, then bought a house – the trip was postponed a few times. At the last minute, Steve had to cancel so Kelly and Cris were the only ones going. 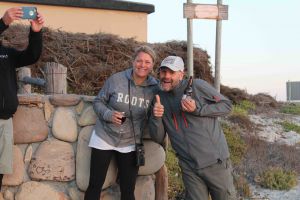 She and Cris practiced riding “crazy” gravel roads and trails to prepare for Africa. Last year she got a Honda CBX500x. Knowing her penchant for adventure and a challenge, Rene recommended the Spectacular South West Africa trip because it was the most adventurous and combined with an optional trip to Etosha National Park, would give them lots of animal sightings.

They were looking forward to three solid consecutive weeks dedicated to riding in an exotic land, adventuring, and seeing new things every day. “You couldn’t say that yesterday was the best because today started something else that was awesome,” she says. Every day, we’d say, “I can’t believe we did this!”

She was surprised at how easily she related to the lifestyle she saw. Everyone we met along the way was very happy. People came out to the street to meet us, took pictures, and the kids high-fived us. 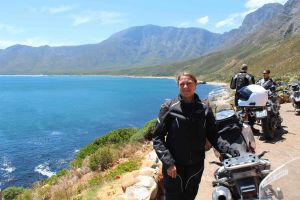 The riding was definitely challenging, although Kelly admitted that some of the best things she’s done are while being scared s$$tless. She’d practiced a lot but was not used to riding in sand. Every day, adrenaline fuelled confidence had her riding on the edge, loving the adventure! It was scary but she never crashed. “I killed it,” she says. “I can ride anything now!” 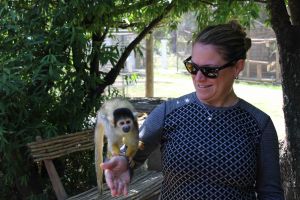 Kelly knew that when Rene took them out of their way to Lampert’s Bay, there’d be a good reason for it. The B&B was nice, but not extraordinary. The walk she and Cris took along the beach, noting the waves, surfers, and the ocean, was gorgeous. But they live on the Pacific coast so again it wasn’t unusual. It was that night’s dinner in a beach hut that she’ll never forget. “Everything was exceptional,” she said. “The only thing they served was fresh fish delivered by local fisherman, cooked on an open fire. We could see the guy cleaning them out back!”

Etosha was incredible. That’s where they saw the honey badger. It’s quite rare to see one but there he was, strutting along. I’m sure he was curious about Kelly and why they said she embodied his characteristics. 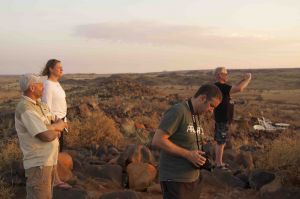 “Overall, the trip raised the bar for what you can do with a motorcycle trip. It opened the door to adventures we can create for ourselves. Having never been to Africa, we were a bit intimidated about what we’d encounter. But now we see, if we can do this, we can do anything! I’m a real motorcycle chic now!”