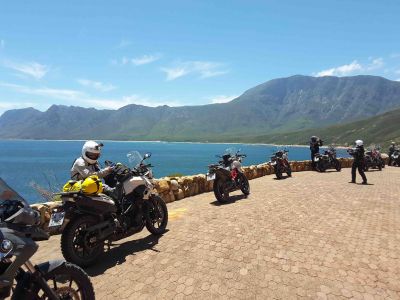 “Travel slows your life down because every day is not mundane. Every day there’s something new and it lengthens your day in a wonderful way. That’s exactly how I felt in South Africa.”

For Mike Peterson, the Spectacular South West Africa safari presented new insights and experiences every day—over and above the spectacular scenery. For example, prior to going, the seaside wouldn’t have made his Top 10 list of things to see while in Africa. Now if someone asks him, the oceans rank right up there with exotic animals, the plains, the small villages and the cultures—“the stuff we saw in National Geographic for all those years.”

“When I thought of South Africa,” Mike says, “I tended to think of the land with vast plains and animals walking around. I hadn’t considered the ocean. People go there just to surf!”

Mike lives in southern British Columbia, not far from the famous Okanagan wine country. Even so, seeing the South African vineyards and going to the wineries was an eye-opener. “I had no idea the grape regions were so massive.” 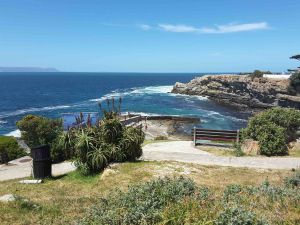 Riding through the countryside, Mike was awed by how harsh and dry the climate is, but more so, how animals can live on next to nothing. What they eat and how they live was on his mind when he was in Etosha National Park.

“You can read about it, but until you watch an elephant chew on a tree trunk,” he says, ”until you’re right beside her and can hear the chewing, it’s unbelievable. You think they’ll just eat the leaves, but they eat a tree right down to the ground! They eat the whole tree!” 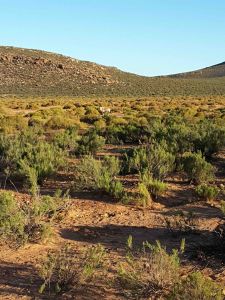 In British Columbia you don’t have to wait for a rhino to get off the road.

“We were in Etosha and just sat and watched it for a while,” he says. “Etosha was so big, wild, and wide open, you didn’t feel like you were in a park. You felt like you were completely out in the wild. We saw giraffes, zebras, lions, and lots of antelope. I’d splurged and bought a nice set of binoculars to bring things in nice and close. We sat and passed them around, completely wowed!

“Every night, I thought I‘ve been waiting so long to do this. 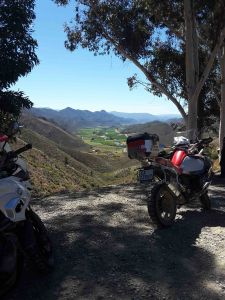 “Walking out to Cape Agulhas to the southern tips of Africa, was bittersweet,” he says. “We were at the end of our ride, which for me, was a big accomplishment, especially on all the dirt roads. It was a little disappointing knowing that things were going to wind down. Walking out to the point was a fitting way to end. I’ve now been to the southern most tips of South America and Africa. I’d love to do a trip up into the Arctic Circle but that’s a summer trip.”

When work at his hardwood flooring company slows down this year, he’s going to ride to Eastern Canada and hook up with a couple of guys from Nova Scotia who were on this SSWA trip with him. Next June he plans to ride Mongolia.

Never did Mike feel like his safety or security was at risk in South Africa. He’s also traveled in South America—Peru, including Machu Picchu and down the coast, Chile, Buenos Aires, Argentina, and Montevideo, Uruguay. He didn’t feel unsafe in any of those places either.

“I want to be the guy that does it and tells everyone it’s all good.”