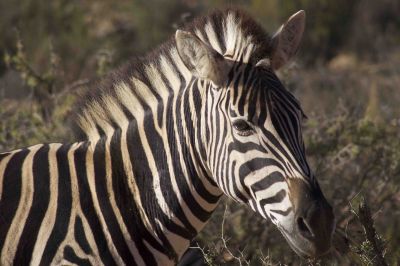 Sheri South was on the second last day of her trip when she awoke doubting that she could manage the ride into Cape Town. Political drama unfolding half a world away had her shattered. It was an aspect of travel in foreign lands she hadn’t anticipated.

Motorcycling in Africa first popped into her head during a trip to Overland Expo (OE) in Arizona three or four years earlier. She heard Rene’s talk, and having no room to cram anything extra into her luggage, ordered his book online. It was waiting for her when she got back to Chicago and she blazed through it, dreaming, knowing that one day she’d do it.

It took another trip to OE the following year to cement the decision and she began to save and plan for a 2016 Spectacular South West Africa trip. 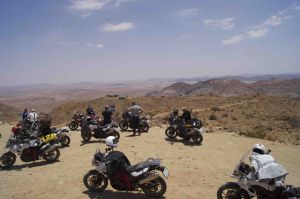 Sheri started riding in 2011 after her divorce. Tired of being told she’d never be able to ride because she was a woman, she said, “Watch me.” The first two years she honed her skills on a 250cc bike, then moved to a DRZ400 and fell in love with off-road riding. Two years ago, she got an F700GS, the same bike she’d have in Africa.

Sheri practiced as much as possible, riding off-road throughout the mid west, including the over 600 mile Wisconsin Adventure Trail which stretched from the border of Illinois to Lake Superior. With a couple of friends, she rode the single-track trail through gravel and sand, camping along the way. By the time her Africa trip rolled around, she’d conquered 10,000 miles of gravel.

Once in Africa, the first day was the most challenging. “Every road surface is different,” she said. “There’s a reason why you should really have some gravel or sand experience. You’ll enjoy it so much more. You could encounter anything from hard packed gravel to irregularly shaped rocks or gravel dust mixed with sand.”

Because the gravel was so dry and riding across it kicked up so much dust, they left a lot of space between riders. To Sheri, that was “the coolest feeling. I couldn’t see the people in front of me or behind me. It was like I was all alone out there.” 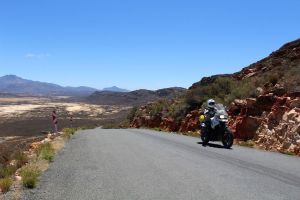 The striking Namibia landscape with its distinctive colours and feeling was “beautiful, haunting, and dramatic.” In addition to feeling like she was on the moon, it also evoked memories of the Grand Canyon where she’d backpacked the year before. Another high point, pun intended, was riding the gravel/dirt/sand/rock road across a mountain pass and into the valley cradling the Ai-Ais hot springs in Namibia.

Once the group crossed over into South Africa, the surroundings were lush and green with vineyards and fields of produce.

Before leaving, Sheri had been concerned that she’d overhyped the trip, but quickly learned that what was in her head, didn’t live up to reality. Every day, everyone in the group would look at each other, amazed at where they were, wondering how the day ahead could possibly be more spectacular than the day before. And it always was. 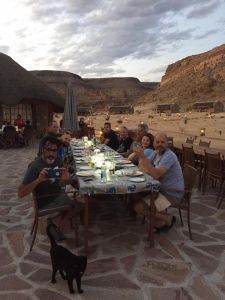 As a solo traveler, she enjoyed the small traveling community she was part of. “We’d travel together, eat, ride, stop for tea, and then stop for the night, usually somewhere with a swimming pool to relax in before dinner. The times around the dinner table where we talked about the day, sharing stories and getting to know each other were pretty incredible.”

Sheri’s no stranger to travel and finds the organized tour the perfect way to travel internationally. She’s served in the military and been to Turkey, Greece, Mexico, the Dominican Republic, and Ireland. She’s volunteered with Vacation with a Purpose and Habitat of Humanity and wants to do more. 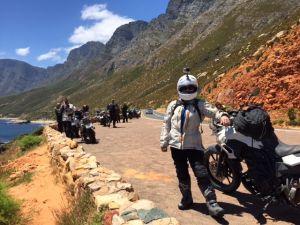 Now she’s fallen in love with Namibia and South Africa and can’t wait to go back and see the Okavango Delta, and ride from Victoria Falls to Cape Town. And ride in Canada, New Zealand, and South America. Somehow, she has to figure out how to get enough vacation from her job as a senior training manager at a pharmaceutical company. She’s also an author, who has published her first science-fiction time-travel novel in July 2020 under the pename Lyn Smith. .

Sheri was the lone American in a group of Canadians. The day that rocked her confidence was when she learned of the election results and the dramatic turning point in her country’s history. To be so far from home was unsettling. Her sobs woke her roommate and she really didn’t know if she could focus enough to ride safely. When she reluctantly joined the group for breakfast, her countenance spoke volumes. No one knew what to say and she was met with deathly silence.

That’s when Rene gave her the greatest gift of the trip. “Don’t make a decision yet. Sit on your bike and see how you feel,” he said.

It changed her mind. “Nobody’s taking this away from me,” she decided. “I’m riding into Cape Town!” She knows she would have regretted it had she chosen to ride in the van. “It allowed me to get out of my head because I had to concentrate on my riding.”

It capped off an incredible trip. “Even if you hype it up a lot,” she says, “there’s no danger of overhyping it.” 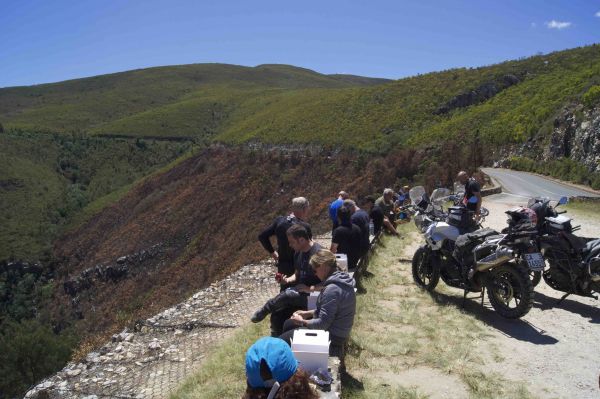