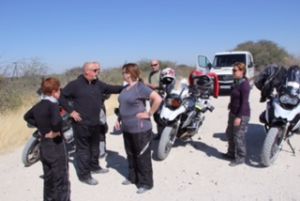 Terror struck Brenda Hansen in the middle of the black African night. She’d stepped outside her tent to answer the call of nature and heard a large growl that sounded just like the lions she’d seen earlier. Frozen to the spot, she couldn’t finish what she’d gone out for until she realized it was the guy in the next tent snoring.

She’d wanted to go to Africa since she first learned about it in elementary school. Now she was here on the Waterfalls and Wildlife trip and she had to pinch herself to make sure she wasn’t dreaming. 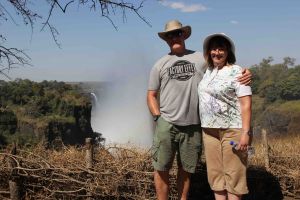 Brenda and her husband Poul have known Rene since the early days. Poul works for a motorcycle gear and parts distributor and supported Rene on his life-changing world tour. When Rene began offering tours, they’d host information sessions at their Edmonton home. Although the couple thought the trips were amazing, they didn’t picture themselves as one of the clients.

Last year it was their turn. Their children (ages twenty-four, twenty-one, and sixteen) were all at home so they could look after each other and they could trust them. Although Brenda rode as a teenager, she preferred riding in Africa as a pillion with Poul. He’d started riding when he was three and became an expert motocross racer in his late teens, placing in the top ten in Canada.

In spite of the night terror, her favorite part of the trip was going out on the Okavango Delta. She loved the smell of the air—earthy and spicy. And she loved being really close to the animals.

Three elephants jostled for dominance right beside their truck. After the biggest one chased the other two away he faced off with their truck, flapping his ears and lowering his head. The driver knew exactly how to handle the situation and there was never any danger to people. Further along, a beautiful blue-eyed leopard who’d just finished eating, prepared for sleep, the carcass of its prey hanging in a fallen tree.

More elephant sightings happened on the Chobe River cruise. Maternal groups tended their babies and socialized with each other. At one point, a baby headed down towards the river where a giant crocodile lay motionless, waiting. The adults saw the danger and stomped their feet to shoo the croc away, at the same time steering the baby away from danger. Their tactics worked and the croc slipped into the river with an empty stomach.

On the same cruise, they watched the trail of a massive hippo as it would come up, exhale through its blowhole, and go back down. 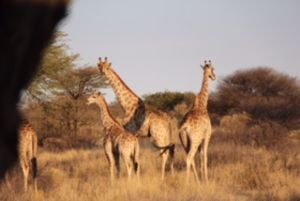 Each place they went, they saw wildlife they hadn’t seen before, like the ostriches that chased them along the road. In Etosha National Park at the end of the trip, they observed a family of cheetahs and the rare Black Rhino from a distance.

Living in Edmonton, Brenda is a frequent National Parks visitor and has seen bears, mountain lions, and cougars, but what she saw in Africa was so exotic and captivating.

It’s whet her and Poul’s appetite for more adventure travel outside of North America. While it’s too soon to have firm plans, they’re considering a Jeep trip in Australia in 2018—hopefully with no night terrors. 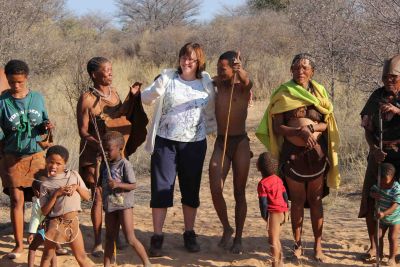