Simon Russell has ridden his sport bike recreationally on Europe’s best tracks, including Le Mans, France, and Monza, Italy. Readily accessible from his home in England, he and friends have shared years of adventures throughout Europe and even the U.S. west coast. 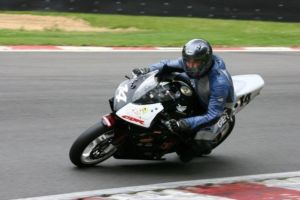 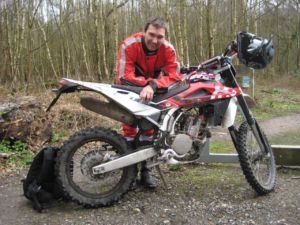 Ten years ago his interests shifted to off-road riding and he bought an enduro bike. England doesn’t have a lot of space or opportunities but he still enjoys exploring countryside lanes.

Still, he yearned for that one big trip, and Africa had always been on his mind. Bumping into the Renedian team at the NEC show in Birmingham opened him to possibilities. 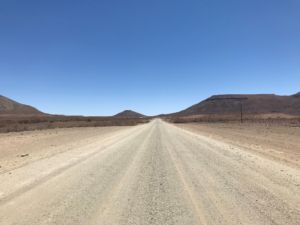 “My fiftieth birthday was approaching,” says Simon. “If I’m going to do it, let’s plan the trip of a lifetime. Just the thought of riding a motorcycle in wide-open desert spaces with so much of the trip off-road in the middle of an enormous landscape was tremendously appealing.”

He and his friend Graham signed up for the Victoria Falls to Cape Town safari.

“You can ride through stupendous landscapes and still feel this could be any number of places. But there was no question I was in Africa,” he says, remembering Namibia. 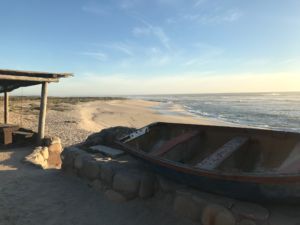 “The desert colours, the heat, the expanse, and the wildness were incomparable. I’m in Africa! Suddenly, you’d see a jackal or an oryx and wonder how they survive in this aridity. We’d cross a small mountain range to an enormous expanse of openness stretching beyond the horizon. The roads were straight but challenging and there’d be nothing around but the colours. Then we’d come to the next pass and valley and experience the exhilaration again. 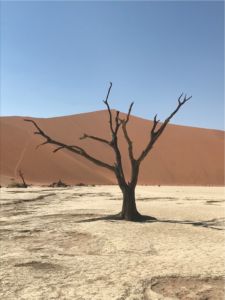 “Sossusvlei was inconceivable. The redness, the Deadvlei trees, and the gnarly roads for days leading there were extraordinary. Every day our group celebrated a fantastic sense of achievement.” 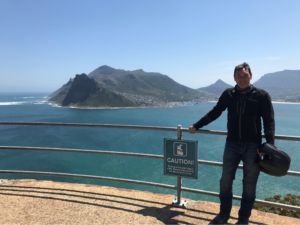 In contrast to Namibia’s desert beauty, northern South Africa was much greener and more mountainous.

“Going through the passes was incredible. The roads were fun with lots of twisties, taking me back to my sport bike days. We’d gone from a very solitary place to one that was more populated, with tarmac roads and big mountains.

“Farming takes place on a grander scale than I’d imagined. They use every single piece of land right up into the foothills. You’re riding for hours through wheat fields, coffee plantations, and vineyards. 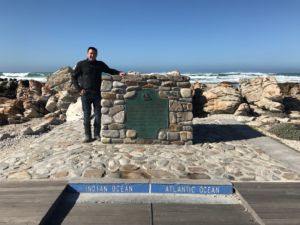 Spending the last few days around Cape Agulhas, where the Indian and Atlantic oceans meet, was a fitting way to end the tour. Simon and Graham extended an already extraordinary trip to spend time in Cape Town and Table Mountain and cap off a memorable fiftieth birthday celebration.

“My family had heard about the dangers and was quite concerned about me going to South Africa. You have to be careful and aware, just like anywhere in the world. It’s a really nice country to visit and the people are amazing.” 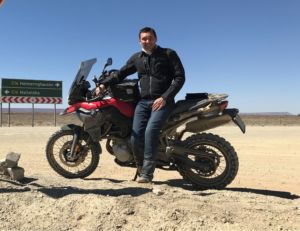 Travelling to parts of the world so different from what Simon is used to has piqued his desire to visit other unique countries and cultures. Next year Graham turns fifty so they’ll celebrate with a trip to either northern Viet Nam, China, and Mongolia, or South America. After that, they’ll find another friend who’s turning fifty and plan the next adventure!