Rene Cormier – “In 1992, I was a university biology student taking external studies courses while on safari in Kenya’s wonderful parks. We were 56 students crammed into a nose to tail convoy of seven minivans. Through the dust near Lake Baringo, my eyes focused on a group of three BMW motorcycles grossly overloaded with spare tires and jerry cans of fuel going the other way. From my much too small seat in the van I peeked up at my first glimpse of a motorcycle being used for adventure travel. This was the way to do it! This was independent travel at its liberated best.

I stared out of the window and daydreamt about how much better travelling by motorcycle would be; no queuing for bus tickets, struggling with train timetables, or being at the mercy of a public transportation system that did not care much about the public it was transporting. The motorcycle would be at home on dirt roads, highways, and trails. It was faster than a bicycle, but not as hermetically sealed as a car. The limited carrying capacity forced the luggage down to its most basic elements, and any subsequent needs would be sorted out on the road with a healthy dollop of creativity.

Being a penniless student, I did not fool myself that the motoring lifestyle that had just passed us would be available to me anytime soon, but perhaps someday…..”  (From: The University of Gravel Roads)

Ten years later, I was the Communications Manager of Colorado-based RockShox and had the world by the tail. Just before leaving for a month-long motorcycle vacation from Colorado to the Arctic Circle in Alaska, the company was sold and I was told that many positions, including mine, would be transferred to Chicago. After due consideration, I declined the position but agreed to stay until the end of 2002 to help with the transition—after returning from vacation.

With a fledging romance, a work-visa that would expire with my job, and an unplanned period of unemployment, I had much to think about during that trip. A chance meeting with two riders from Colombia in a ferry lineup in Alaska planted the seeds which would change the course of my life. They convinced me to take a year-long trip to South America, but with empty time stretching out in front of me, that idea grew to a multi-year trip around the world. Why not? I might not have this opportunity again.

Financing such a venture was the biggest constraint. I had no idea how much it would cost but a little research would give me a good idea. I came up with an ambitious plan to travel for three years on a budget of $25 a day. It required selling my house and all my material possessions to generate the needed cash, an exercise which revealed just how ambitious that plan was.

On October 5, 2008 I pulled into Kitsilano Beach in Vancouver, completing a circle that had taken me 154,000 kilometres (95,000 miles), 41 countries and five years. I thought back to how green I’d been crossing that first border into Mexico and how my perspective had changed.

The travelogue of that ride, The University of Gravel Roads, won the Bronze medal in the 2010 Independent Book Publishers awards, the 2010 da Vinci Eye award, and was a finalist in the Eric Hoffer Award for Short Prose and Literature. 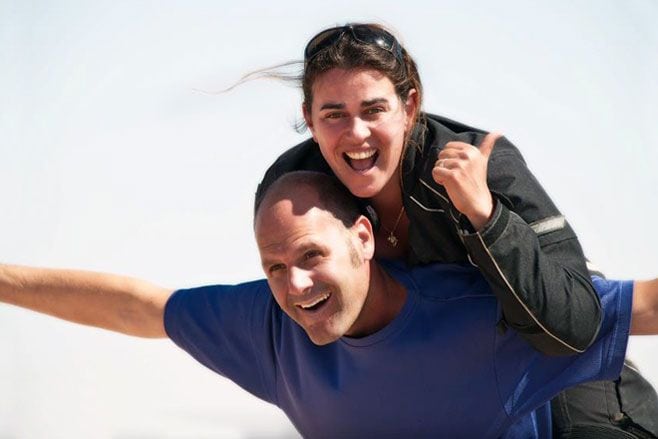 While riding in South Africa, I made a last minute decision to head south to Capetown instead of north to Yemen. There I met Colette, someone you I would remain in contact with during the final two years of my travels, not knowing where the long distance relationship would lead.

I started Renedian Adventures in 2009, and Colette and I married in 2010. Our eldest son Jacques was born in 2012, followed by his little brother Francois in 2015.

We spend half the year in Canada and the other half in southern Africa, where I love showing people this very special part of the world.

Also, in 2012 I joined the Ted Simon Foundation’s Committee of Advisers to encourage and assist travellers in making an extra effort to develop their observations and insights into something of value for the rest of the world to share.

See all of our worldwide crew!