Rob, who’s been with Renedian for three seasons, leads tours in Africa. Recently, he returned from his first Mongolian expedition. 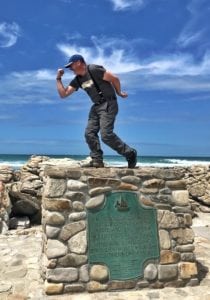 “I tell people who come to Africa, if they’re really lucky, they’ll get this jolt to the heart. It’s Africa’s drumbeat. You can’t hear it, but you’ll feel it. It’s a real thing, and then Africa has a hold on you.”

“When I first hear that lion roar, even now, the hairs on my arms stand up. It gets your heart beating, and it also starts the biorhythm with Africa. It’s something very primeval.

“The first time I first heard it was in my twenties.  I was sleeping out in the middle of the [Okavango] Delta with a group of porters next to a fire. I saw stars, the likes of which I could only dream of, and heard the hyenas, but the lion was what really got to me. That 21stCentury person falls away and you realize this doesn’t happen every day.

“Another time was in Rwanda when I was lucky enough to be part of a very small group to see the gorillas. It was incredibly humbling. You get a chance from a meter and a half away to stare into the eyes of a mother gorilla. She’s holding a little baby and staring at you. You feel the thought processes traveling between you as she tells the baby to sit still, he’ll be gone in an hour. Some of the babies wanted to play and you sit still and let them crawl over you.

“Standing at the top of Victoria Falls, looking at the phenomenal landscape also gives you a kicker.” 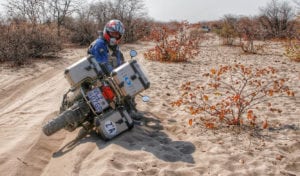 Born in the U.K., Rob’s father bought him his first motorcycle at age sixteen to ride to school. His creative career in the magazine industry took him to London where jobs were plentiful. He moved around, advancing his career and meeting new friends. One of those was a ‘South African lass’ who became like a sister. During a visit to see her in Cape Town, her boss, an expat Brit, offered Rob a job on the spot. He’d always dreamt of going to Africa but needed time to make arrangements. The boss kept the job open for six months, Rob moved to Africa and bought a motorcycle. 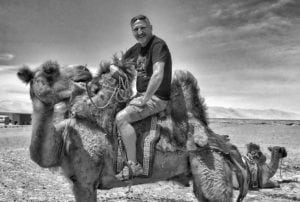 After completing his one-year contract, Rob ran his own design studio for ten years, combining his creative skills as a designer with photography. It also gave him many opportunities to travel and fly out to places like Rwanda and Malawi. 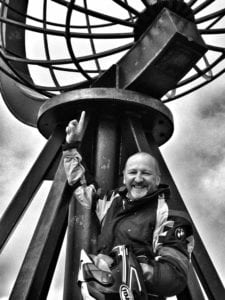 Burned out, he transitioned out of his studio and became the Art Director for South Africa’s premier travel magazine. Soon after starting, he pitched an opportunity to ride a motorcycle from Pretoria to Zanzibar—sixteen days and close to 5,000 kilometres of backroads, sand, and gravel from South Africa to Botswana, Zambia, Malawi, and Tanzania. Through that, he became a journalist and his story, the cover story. 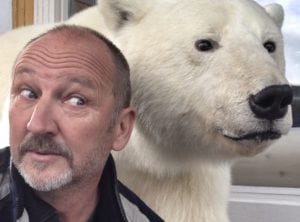 Rob’s entry into guiding tours came about through a series of serendipitous events. “After leaving the magazine, I became the web editor for BMW for six months to fill a gap. Through that, I was assigned to cover a story for Charlie Boorman and Ewan McGregor who were on their Long Way Roundtrip. Three years later, Charlie’s PR guys phoned and asked if I’d be interested in becoming the embedded photo-journalist and photographer on his first commercial trip from Cape Town to Victoria Falls. That’s how it started. I also worked with Ayers Adventures.

“Rene and I met through a mutual friend when Rene was looking for someone to help him with the tours, initially just to drive and see how we got on. I had the requisite skills and licenses so three years ago, I worked the first season as his backup driver and we hit it off. 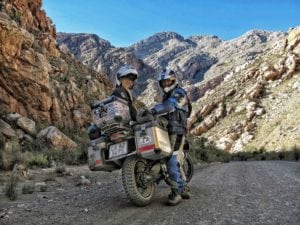 “Our job is to try and tick as many boxes as we can for our guests, and for those who are open to it, to show them our Africa. We try and deliver more than they expect.

“We help them explore as much of themselves as Africa, tapping into those primal places inside that resonate with a drum beat. Very few people leave untouched.”

Having traveled extensively in Africa, in various capacities, Rob knows the countries, the borders, and how to cross them as easily as possible. Not only does he lead groups, but through Renedian, he leads individual customized experiences.

“Come with an open mind and be open to every experience. Listen to your guide. We know what we’re doing. We live here. No question is too daft. I’d like a question I’ve not heard.”