Stéphanie Pérusse on Waterfalls and Wildlife

For the two weeks she was in Africa, Stéphanie Pérusse tried to find a cloud. 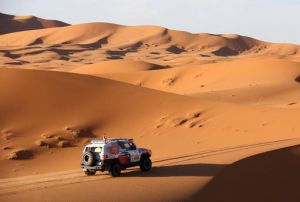 “I’ve traveled a lot and been in the desert four times,” she said. “There are always little clouds somewhere but I never found one. It was amazing!”

Stéphanie and her husband Sébastien Fauré were part of the Waterfalls and Wildlife group that toured through Namibia, Botswana and into Zimbabwe in July. “Sunsets and stars were even better than in the desert because there were no clouds.”

The desert Stéphanie’s referring to is the Sahara, at the top of the African continent. She’s been there three times—twice for training, and once to race in the Rallye Aïcha des Gazelles, the only all-women completely off-road rally in the world. Women from more than thirty countries gather to race in an old-fashioned automobile competition—no speed and no GPS. 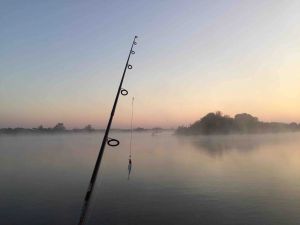 “All you have is a map and compass and you have do whatever you can to find the shortest way between two checkpoint,” she says. “There are daily distances you need to make before the checkpoints close, but timing isn’t the priority.” It’s a hard and technical race, but not a speed race. The desert throws everything at you—sand, dust, big rocks, small rocks, hills, mountains, and ravines. I’d go back tomorrow.

“For nine days you’re in the desert, sleeping in a tent, eating little cans of tuna. We carry extra food and water in the truck, always enough for an extra day or two.” 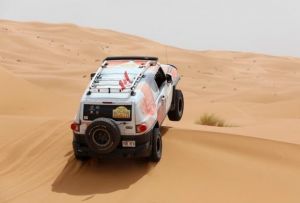 Determined to make a good showing, Stéphanie started training started three years before the race with a seven-day walk in the desert. It paid off. Although it was her first race, she and her experienced co-pilot navigated their FJ Cruiser to a third place finish, out of 170 drivers.

When she started riding a motorcycle five years ago at age forty, it was to please her husband. “I’d always ridden bicycles and Sébastien took it up to please me. Then it was my turn to do something for him.” To her surprise, she loved it.

“I like everything that has motors,” she said. “My father, a race car driver who got me interested in racing from an early age, said he wouldn’t talk to me anymore if I learned to ride a motorcycle. It was too dangerous. He still talks to me,” she said, laughing. 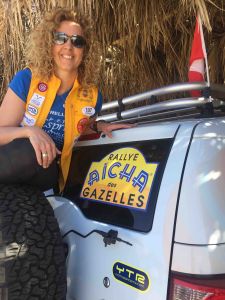 Stéphanie and Sébastien have traveled widely in Asia, Europe, and South America. Now she’s enamored with Africa. “I’m not the kind of person that likes organized trips, but I really appreciated that we didn’t have to think about anything. You don’t feel the organized trip thing that I don’t like.”

The motorcycle part was fun, but it was everything around it—the people, animals, and a different way of life—that made the trip. 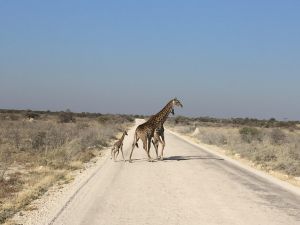 “I wondered what kind of people would be on the safari with us. I thought it would be cool people and that’s what we had. Motorcycle people are not the same kind of travelers you normally have when you travel around the world and see museums. We had lots of fun and everyone was very respectful, not too invasive, and did their own thing, coming together sometimes. The ambiance of the group was perfect.”

The sunset cruise on the Chobe River left the greatest impression. “We saw hippos in the water, elephants on the ground, and crocodiles lurking opportunistically.“

But the most amazing sights were the beautiful sunsets and starry nights, brilliant in a cloudless sky.